You're using an outdated browser. Please upgrade your browser to improve your experience.

Let’s roam this beautiful planet and surf its ultimate breaks. Discover places around the world you wish you could be right now. Sign up to the Wayfarers Club to receive our latest news, VIP offers and postcards from your favourite global destinations.

Surfing the Maldives: A Surfers Guide to the Atolls
August 12th, 2019 + Wayfarers Atlas

While the Maldives is exposed to the same swells as Indonesia, the feel here is much different. Offshore winds, fun pockets, point breaks and long rides are the hallmark of the Maldivian surfing experience. Paired with laid back luxury surf resorts, endless boat trips, and an uncrowded scene makes the Maldives the crowning glory of the surf world. Here’s our guide to picking the perfect atoll for your next luxury surf trip…

Chickens is best on a big swell, aptly named for the quiver down your spine when you spot this long-left hander with perfectly formed barrels. Riding out from the deserted island Villingilimathi Huraa this wave is suited to experienced surfers.

Cokes is also close by and a hollow barrelling right-hander that will tempt intermediate surfers when the wind blows in from the South and North-East.

Those after a long speedy right-hander should head for Jailbreaks, and Honky’s, another barrelling right, is considered one of the best spots in the whole of the Maldives.

SURF SEASON – Year-round, with biggest and best swells from May to October.

A pint–sized secluded island where the sky fuses with the sea, the Four Seasons Kuda Huraa is every inch the storybook vision of paradise. Families and couples seeking a place that offers a more intimate touch than your standard tropical resorts are sure to fall head over heels for Kuda Huraa. Designed in the style of a traditional Maldivian village, this is a place where flowers bloom, smiles are plenty, and the surf rolls in. 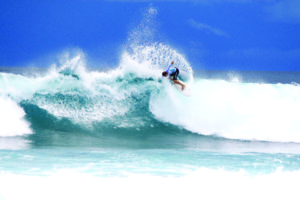 Riptide is a speedy right-hander breaking off a small reef in the middle of a channel, perfect for all level of surfers. On a solid southeast summer swell, Natives, also known as Foxys, is the place to be. This break can produce waves that rival those in the North Male Atoll (minus the crowds) stretching up to 150 meters meets long.

Beginners can find their comfort zone at Kate’s – a playful party wave rarely reaching above a meter high.

SETTING – A family favourite located only a 40min speedboat ride from Male and one of the few resorts on the Maldives to have a wave breaking on its shores.

CHAT TO US ABOUT PLANNING THE ULTIMATE TRIP TO KANDOOMA RESORT

SETTING – Anantara Dhigu is an island paradise perfect for couples and families who are after a resort conveniently located close to Male and surrounding by fun waves.

In a fabled blue lagoon, three islands sit side by side. One of these lush slips of green is Anantara Dhigu – a spot favoured by the young and the restless, perfect for those seeking a little more action than your average fly and flop destination. Sandy trails lead to mirrored waters, and peeling waves thunder close by; Anantara Dhigu is all about the ocean…a place to embrace your dreams. 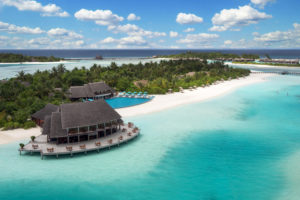 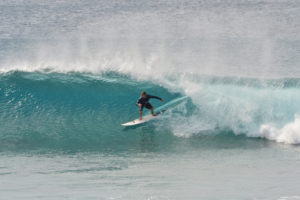 The Central Atolls are a sweet remedy for when you want to escape the crowds in the north. While the size doesn’t match that of the Male Atolls, the surf remains consistent, and just as hollow but with fewer people competing for waves – this the pinnacle of a luxury surf trip. Waves tend to be fast, and while they may be smaller – these waves take skill and prowess probably better suited to intermediate surfers.

Kasabu is excellent for all level of surfers – Intermediate to advanced surfers will love the waves long rip-able walls and can except barrels when larger swells roll through. Beginners can sit wide on the end section where the waves feather off into the lagoon. Vodi is a perfect left-hander breaking along the shores of Niyama Private Islands. This break is reserved for guests of the resort and FREE to surf. A rare treat in the Maldives.

You may want to save your strength for Mikado, also known as Farms, one of the most consistent waves in the Thaa Atoll. A powerful right-hander with plenty of play during high tide.

Endless Summer II fans can follow in the footsteps of Pat O’Connell and surf one of the Laamu Atolls most consistent waves, Ying Yang. This powerful right-hander is unique, starting out mellow before wrapping into a long quick barrel.

SETTING – Niyama Private Islands is stretched over two islands and offers an exclusive world-class wave on its doorstep.

Niyama Private Islands Resort blends perfect play with the chance to chill. Stretched across two islands – one for each magical mood, you can drift away at the spa and lounge on sugar-white sands on the Isle of Chill. Over on the Isle of Play you can party in underwater clubs, swim with sharks, and of course – hit some of the best waves in the easy breezy central atolls. Couples will fall hard for the boutique vibe of Niyama, but families will also find a tailored approach for kids of all ages – there’s no doubt about it; Niyama boasts the best kind of bliss. 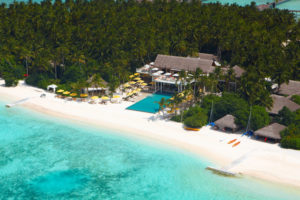 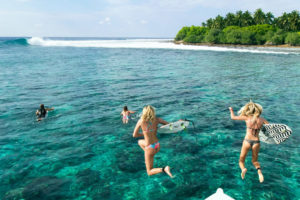 SETTING – A luxury island paradise surrounded by some of the Maldives best waves and perfect for couples and families.

A glistening pearl in the turquoise and gold crown of the Thaa Atoll. The Como Maalifushi is a rare delight for surfers and dreamers looking for their own slice of Maldivian paradise. The high-end haven is a vision of minimalist chic with rustic touches – perfect for lovers of barefoot luxury. Beautiful breaks, hammerheads drifting beneath your overwater villa, and a string of nearby islands set the mise-en-scene for family picnics, honeymoon retreats, and reimagining your personal sense of bliss. 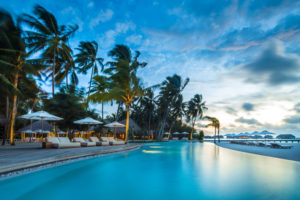 SETTING – Six Senses Laamu is a true barefoot island paradise, home to uncrowded waves and fun for the whole family.

Six Senses Laamu – even the name rolls off the tongue, conjuring visions of stilted ocean villas, splayed palms and bronzed surfers in perfect offshore conditions. As the only resort in the luscious Laamu Atoll, the famed Yin Yang surf spot becomes your very own playground. Back at the resort and your ‘private experience’ butler is there to make sure you are loving the jungle cinema, wine cellars and glass-bottomed bathtubs. It’s sensory overload at this soft, dreamy and stylish retreat. 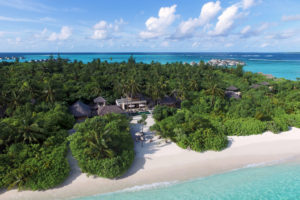 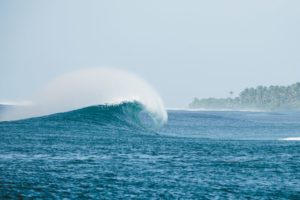 A stay in the Southern Atolls will see you gifted with empty breaks and incredible waves. Few surf charters come down this far, so while the waves won’t be completely deserted, you won’t have to hustle for a wave. Typically the waves tend to be smaller in the Southern Atolls, however, when the conditions are right and southern summer swells roll in you can expect waves with a ton of power and world-class barrels. Advanced surfers are better suited to nailing the south – also known as the final frontier in surfing.

Tiger Stripes is a long and lavish left-hander that offers smooth inside tubes and a lot of fun. Two Ways is similar to Sultans in the north and is excellent for those who want a bit of depth beneath their feet. Offering mellower waves this break is great for intermediate surfers.  Antiques is a good spot for when you want a more forgiving session on a long right-hander. Blue Bowls is a long right-hander that’s a regular stop for surf charter boats cruising through these waters.

SETTING – Ayada Maldives is great for families and couples looking to explore a remote surfers paradise.

SURF SEASON – March to October, however March to April and September to October are considered the best.

Some places blur the lines between dreams and reality. The Ayada Resort is one such spot that captures the power of what can happen when man and Mother Nature come together. This carefully curated five-star resort occupies prime real estate on the sweet southern rim of the Gaafu Dhaalu Atoll. Lagoon-like waters, around the clock butler service, sunset suites, and expansive spa are just a few murmurs that made the likes of Conde Nast sit up and take notice. Surfers seeking a blend of world-class breaks near the ‘five islands’ along with a picture-perfect paradise to call home, will adore the decadent delights of Ayada. 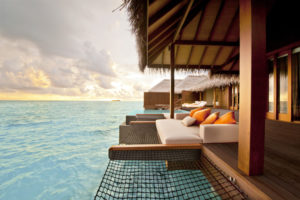 Whichever Atolls you pick you can be sure that it will be a surf trip to remember.

If you are looking to explore the magic of the Maldives on an epic surf trip Wayfarers Atlas can help you find the ideal destination for you. Get in touch to discuss your options with our travel specialist.

Are you looking to plan an incredible family surf trip?

Here are 6 things you should consider – 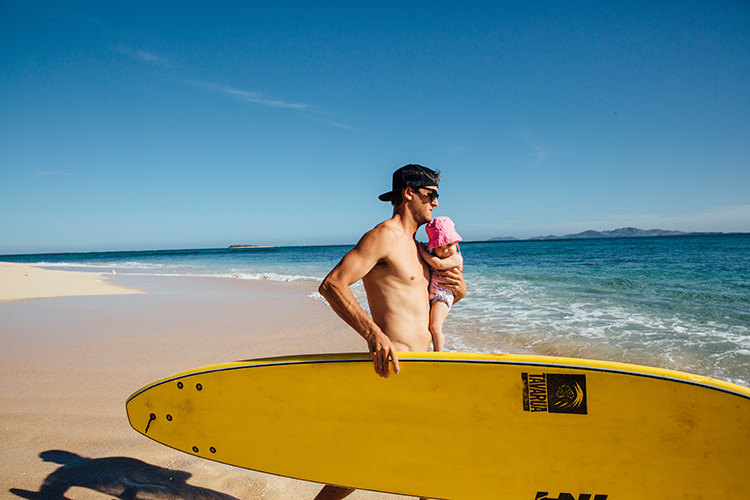